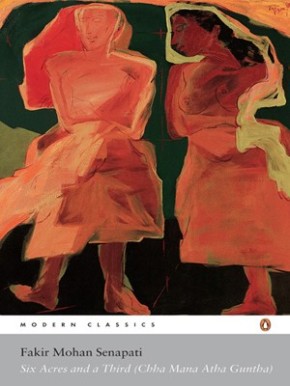 For the last 10 days or so, I have been reading a eloquently written & humorous novel named ‘Six Acres and a Third‘ by Fakir Mohan Senapati (1843-1918).This novel was written by Senapati in the 19th century in Oriya language. I should frankly accept that I had never read anything long (except some short stories) in original or translated from Oriya language literature before I chanced upon this book in the Leiden University’s library. So this is my first experience of any Oriya prose. The novel was originally named ଛ ମାଣ ଆଠ ଗୁଣ୍ଠ [‘Chha Maana Atha Guntha’] and its English translation is published by University of California Press in the year 2005.

While reading this book, I also came to know that Fakir Mohan Senapati is largely regarded as the father of Oriya nationalism and modern Oriya literature. Set in the villages of 1830’s Odisha, the novel talks about the story of common people and their evil landlord, Ramachandra Mangaraj. The story is written from the eyes of someone who lived and experienced all of these from the ground. The story tells you how poor peasants are cleverly exploited by the landlord and how different communities survive this exploitation. What was puzzling to me is the fact that even in early 19th Century, the petty officers in Police were as much corrupt as we find them nowadays. Another point of interest for me (languages wise) is when the narrator talks about one Zamindar Sheikh Dildar Mian:

Sheikh Karamat Ali used to live in Ara district, and had now moved to Midnapore. Everyone called him Ali Mian, or Mian for short; we will do the same. Ali Mian began his career as a horse trader. He would purchase horses at the west Harihar Chhatar fair and sell them in Bengal and Orissa. Once he sold a horse to the district magistrate of Midanapore. The Sahib was very pleased with it and condescended to inquire about Mian’s business and income. When Mian told him there was not much profit in horse trading, the Sahib, wanting to offer him a job, asked if knew how to read and write. Mian replied,  Huzoor, I know Persian If you would kindly give me pen and paper, I could show you I can write my full name.

In the past, the Persian language had been held in high favor; it was the language of the court. With a sharp and pitiless pen, God has inscribed a strange fate for India; yesterday the language of the court was Persia, today it is English. Only he knows which language will follow tomorrow. Whichever it may be, we know for certain that Sanskrit lies crushed beneath a rock for ever. English pundits say, ‘Sanskrit is a dead language’.We would go even further , ‘Sanskrit is a language of half dead’.

Few Oriya words/facts I learned from this book are:

Debottara: Land given free of rent to defray the cost of worshiping a deity

Bharanas : a local measure of grains in Odisha

Pana: an ex-untouchable caste of Odisha, There are six sub-castes viz-Buna, Ganda,Patra, Sonai, Samal and Jena of Panas.

The book is also interlaced with several Sanskrit verses and they are beautifully translated as well:

This one is from Guru Gita

He who applies the balm of knowledge.

And opens our eyes blinded by the disease of ignorance,