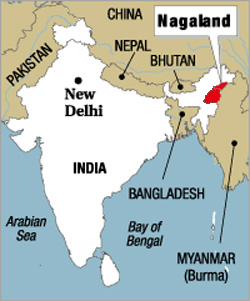 When I started thinking of visiting Nagaland, I was having a bagful of emotions. Firstly I was quite excited to go and meet my fascination (or shall I say my love for things others don’t really venture into). Secondly, I was also somehow sceptical and anxious about the place and people. It was not as if it were my first trip to north eastern part of India. I had been to Meghalaya twice where I first fell in love with cuisine from North-East. But those visits were in a secure company of fellow travelers and anyways we did not venture much deep in Meghalaya. But this time I was going alone and that too into well dreaded Nagaland.

From my adventurous student days in the university, I had always seen Nagas with a bit of awe mixed with the feelings of suspicion. But things changed once I started working and living at my new workplace at Agra. Here I saw Nagas from my own eyes and skin. Lot of my misconceptions dissolved and I found myself quite fascinated by their way of living. Actually those guys were exactly doing the same things I always tried to live on i.e. to live life away from the general crowd. They taught me that you don’t have to be educated in San Francisco to listen Rock music. You can just sing and play it if you desire so. Those innocent fun loving guys showed me the brighter side of Nagaland. It’s hard to befriend them but you will cherish the time once they let you share their unique world. I remember one of them commenting to me that I was so much like them…the way I sing with a much weird high pitch, the way I cannot escape company of friends for long, my guitar and drums love affair (though I can’t play either of them, thanks to my late arrival in this music scene), my carelessness and above all the desire to be different or unique or weird.

I was born in a quite a traditional family, going by the present trend. I was doing things none dared did in my family. I ate, drank and lived much like a Lennon fanatic (minus drugs and of course America).I grew in the university on a high dose of Rock plentifully supplied by AIR FM’s Wicked Hour program plus nicotine blues. I never knew this can be a way of life in Agra till I met the Nagas. So enjoyed every bit of their new found company. Coming back to the journey, I decided finally to embark on this journey into Nagaland.

Through different sources, I had come to know that to enter Nagaland, I need an Inner Line Permit (popularly known as ILP) which I found, can be obtained from the office of Deputy resident commissioner, Nagaland House at Delhi. So in mid November ‘07 I managed to get the much needed ILP from Delhi’s Nagaland Bhawan (at Aurangzeb Road, New Delhi-11) after shelling out 20 rupees and filling-in the formalities. The first thing which bewildered me was the following lines written on top of my ILP

Here I was standing at Nagaland Bhawan, Delhi in the year 2007 and we still have to abide by the laws put in paper in the year 1873. Whoops!  Thats incredibly Indian!

My ILP also mentioned the purpose of my visit, the duration (usually 15 days which can be extended by permission from local authorities), Identification mark and the place where I wish to go. Actually I wanted to reach Nagaland by the first week of December. This was the time I was informed that great show of Nagaland ‘Hornbill Festival’ takes palce. Another reason was the Rock gigs I could lay my hands on during Hornbill. But unluckily I could not move around that time and so I chose Christmas time to be there. In fact Christmas time is a good time to travel to Nagaland as the entire Naga community is in a festive mood during this time. Plus there is ceasefire among warring factions of Naga freedom fighters and opportunists alike during this festive season.

As my savings did not allow me to afford a flight to any closest Airport to Nagland viz Dimapur Imphal and Guwahati, I chose to book my AC-III rail ticket to Dimapur from Tundla by Brahmaputra Mail. Dimapur is the commercial capital and biggest Railhead in Nagaland. I could have also gone by Delhi-Dimapur Rajdhani Express but as it doesn’t halt at Tundla, I would have to shell out more money first and endure the five hours boring ride by bus for travelling to Delhi. But I would recommend Delhi-Dimapur Rajdhani for travellers starting from Delhi. And Brahmaputra Mail which starts from Delhi for those with a shoe string budget (and those who really want to see the true colours of India).

5 thoughts on “Into Nagaland- Part I”